Tom Schwab here. I've been where you are. I feel the frustration. Let's talk.

Your product is great. Your service is phenomenal. You could help thousands and be rewarded handsomely. You only have one major problem. This problem is real, and it's personal. You know in your heart, and it hurts:

Your ideal clients don't know you exist. You aren't loved or hated; you are totally ignored.

You've done the work and have what it takes to be successful. Heck, you've been successful in everything you've done. Now it seems like it's harder and harder to break through and get noticed in a noisy world. You've tried buying attention with ads and promoted posts in social media. You have even spent hours slaving away on content like blogs, but it still seems that you're ignored. 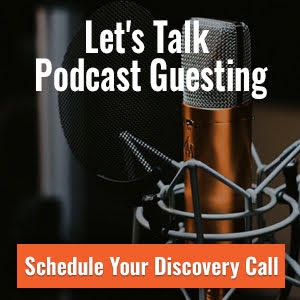 Your customers have said "NO" to your noise

As you've tried to get your message heard by shouting louder, something remarkable has happened.  It's why your paid ads and blogs are no longer working (and why they won't work in the future).

Your prospects' lives are getting quieter.  They have intentionally blocked out the noise, the commercials, and all the chatter they don't want to hear.  They wear their headphones or earbuds. They focus on what they choose.  If you want to grow your business, you need to get noticed. To get noticed today, you need to get into what they are listening to.

The rules remain, but the tools have changed

Marketing, at its heart, is starting a conversation with someone who could be an ideal customer. Over time many tactics from TV to billboards have worked for a while. Even barkers at a carnival were once the new great tactic that worked. All tactics have an expiration date. Soon they become familiar, stale and ineffective. They become ignored.

This is what I found in 2014 as I helped business owners grow using a permission-based inbound marketing strategy. We tried the same tools that had built my eCommerce business from a regional player to a national leader in under three years. Blogs and social media were rocket fuel before 2010. Today they work like overpriced watered down cut-rate gasoline.

We knew the strategy worked, but the tools needed updating. If people weren't reading blogs, what were they doing? What were their replacement to get their news, information, and entertainment? How could we talk directly to them?

​FACT: The secret to talking to anyone is getting involved in the conversation they are already involved in.

The answer seemed like common sense. Get involved in the conversation already going on. If the leader of that conversation introduced us as the expert, we would get instant credibility and authority. In the digital age, we could have this intimate conversation online with thousands at once.

An instant flow of traffic and quality leads

What we saw with targeted interviews on shows prospect already listen to provided:

It worked for coaches, authors, franchisors, manufacturers and more

Before my first podcast interview, customers couldn't find me with a bloodhound. Even though I'd tried a bunch of things and spent lots of money, It was like my business was in the witness protection program. From my first podcast interview, I got traffic, leads and paying customers. Within the first year, it worked so well I filled up all my 1 on 1 coaching spots, launched 7 paid mastermind groups and a paid community. My podcast interviews have led to paid speaking invitations, a book,  and relationships with the movers and shakers.

Your customers live in an on-demand on the go world. Marketing is starting a conversation. TV, Radio, newspapers and even blogs are dead. If you want to start that conversation, you must be where they are already listening.

FACT: Your ideal prospects will be listening to podcasts in the future. The only question is if they hear you or your competitor

Hosting your own podcast is hard!

One way to leverage this incredible medium is to start your own podcast. Much like starting a blog, it takes time and capital to build your audience.

It's not just recording an interview (the fun part) it's the hours of preparation, editing, uploading, and promotion. If you are launching a new podcast, expect to invest $3,000 up front or $500 per episode if you outsource everything. Budget $30k the first year. Then expect a small audience as you slowly building your following.

If you want more real business results with less effort, focus on being a great guest.

Get more results with less effort as a podcast guest:

​FACT: You get more results with less effort as the podcast guest

Results come from the Targeted Interview Process, not the interview.

Getting interviewed on podcasts is easy. With over 300 thousand podcasts, anyone can jump on a show. Unfortunately, interviews alone won't get you results. The interview is the fuel to power your Targeted Interview Process. We openly share and teach the proven process. It's not a secret, but it takes time, knowledge, skills and connections. You can make it to the big stage. All it takes is time and hard work. The directions to Carnegie Hall aren't a secret: Practice, practice, practice. Or you can partner with the only agency with the connections, systems, talent and proven track record of results.

I had been on about a dozen podcasts and gotten only a handful of leads. I was beginning to doubt if podcast interviews even worked. Then I started using Interview Valet's Targeted Interview Process and immediately saw results. Over 50 perfect leads in the first month. In the first 6 months, over 40 podcast listeners purchased our franchise. This is the most powerful system I've ever used to grow my business.

You are the Rockstar. We are your roadies.

Sinatra only sang. He had someone else do everything else. You are the performer. Interview Valet takes care of everything to make your interview fun, easy and drive real business results.

Working with Interview Valet has been an incredible ROI. Their team is stellar. Their process is proven. It's magical! Tom and Interview Valet are the Fairy Godfather of podcast bookings.

Will you be the next Rockstar?

As we reviewed the levels of success, it was clear that those that had the most amazing results had three foundational pieces:

Get Ready to Ignite.

While we both know there is no such thing as an overnight success (you've worked hard to get here!), the digital age has produced overnight stars. Being featured as the expert guest on targeted podcasts your ideal customers already faithfully listen to is like:

If you made it to this point, you are curious how targeted podcast interviews could transform your business. Find out in a no-strings-attached free 15-minute evaluation with one of our experts.

Here is what you're guaranteed to get in our 15 minute conversation:

Here is what you will NOT get:

What Does It Cost?

Initial engagements start at around $1K per month. All of our plans are based on the number of Complete Podcast Interviews. All interviews are guaranteed. We get paid for results, not efforts.

You should pray your competitor isn't reading this too